13.7 Deciding Which Predictors to Include in a Model

From the analyses above, it is clear that a model including both Neighborhood and HomeSizeK is better, not only than the empty model, but than a model that includes only one of these predictors. But it’s not always true that two predictors are better than one. Deciding which variables to include in a model is an art and requires judgment.

Let’s look at another model for predicting PriceK in the Smallville data set. But this time let’s use HomeSizeK and HasFireplace as the two predictor variables. Below we’ve printed out the ANOVA table for this new multivariate model.

The PREs for each of the predictor variables, however, present us with a puzzle. While the two-predictor model explains 44% of the variation in price, HomeSizeK explains only about 10% of the variation, and HasFireplace, 5%. Furthermore, the p-values for neither HomeSizeK nor HasFireplace fall below our .05 criterion, meaning that we can’t rule out that either of these effects might just be the result of random sampling variation from a DGP in which both effects are equal to 0. How is it possible that the individual variables explain so little compared with the overall model?

The PREs for HomeSizeK (region A) and HasFireplace (region C) tell us about each variable’s unique contribution. The unique contributions are small, but region B, which represents the overlapping contributions of the two variables is large. This is why the overall model has a much larger PRE than the individual predictors.

Even though these Venn diagrams are not exactly to scale, we can use them to reason about the relationships between the predictor and outcome variables. Based on this Venn diagram, specifically because of the large overlap, we might suspect that HomeSizeK and HasFireplace are highly related to one another.

Comparing the Multivariate and Single-Predictor Models

Take some time to compare the three ANOVA tables you produced. There are a few different things to notice about these ANOVA tables; we will discuss some of these below.

The reason for this result is the overlap represented in the Venn diagram by region B, something statisticians call redundancy or multicollinearity. You can confirm that HomeSizeK and HasFireplace have a lot of redundancy, or shared variance, by plotting PriceK by HomeSizeK and using color to highlight those homes with fireplaces. 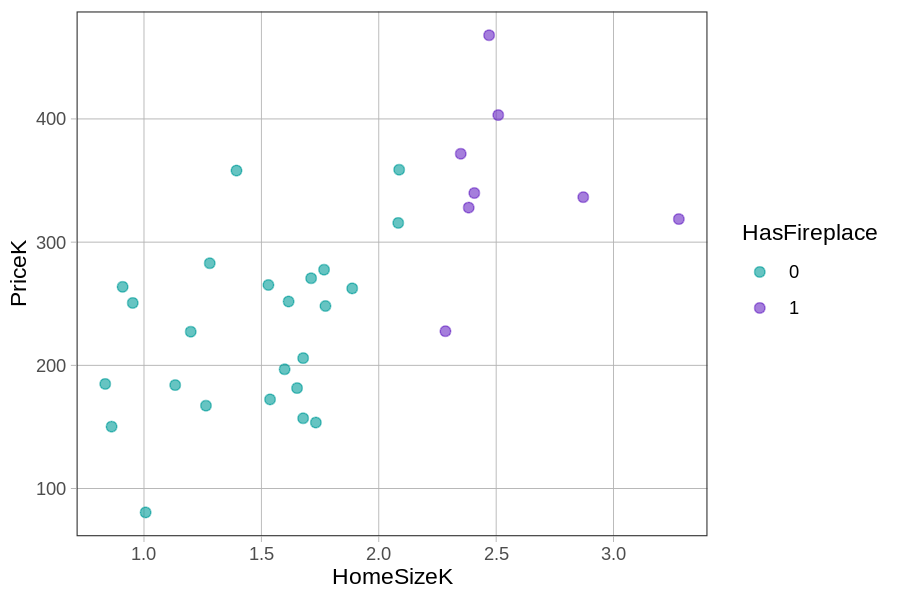 The redundancy between the two predictors is visible in the graph: homes with fireplaces tend to be larger than homes without; and larger homes are more likely to be the ones that have fireplaces.

In cases of high multicollinearity between two predictors – such as we have between HomeSizeK and HasFireplace – we need to see how much PRE we gain by including both predictors in the model. In this case, we don’t gain much: the PRE for the HomeSizeK model is .42, but for the multivariate model it only increases to .45. We might prefer to just stick with the HomeSizeK model.

We always want to keep in mind the tradeoff between reduction in error and the added complexity of having both predictor variables in the model. Is the multivariate model a good deal?

Another reason to prefer the single-predictor HomeSizeK model has to do with causality. What is really causing a house to be more expensive? Is it the fireplace, or is it the additional square feet? If all we care about is prediction, it wouldn’t matter which model we chose. But often we are trying to find out what the causes of variation are.

Both would have some effect. But probably the square footage would have a bigger impact than the fireplace. The single-predictor HomeSizeK model does a good job predicting, uses only one degree of freedom, and represents our understanding of what causes variation in home prices.