We have developed the idea of the mean being the simplest (or empty) model of the distribution of a quantitative variable, represented in this word equation:

If this is true, then we can calculate error in our data set by just moving components of this equation around to get the formula:

We generally call the error calculated this way as the residual. Now that you know how to generate predictions, we’ll refine our definition of the residual to be the difference between our model’s prediction and an actual observed score. The word residual should evoke the stuff that remains because the residual is the leftover variation from our data once we take out the model.

To find these errors (or residuals) you can just subtract the mean from each data point. In R we could just run this code to get the residuals:

If we run the code, R will calculate the 157 residuals, but it won’t save them unless we tell it to do so. Modify the code in the window below to save the residuals in a new variable in Fingers called Resid. (Note that the variable Predict already exists in the Fingers data frame).

These residuals (or “leftovers”) are so important in modeling that there is an even easier way to get them in R. The function resid(), when given a model (e.g., empty_model) will return all the residuals from the predictions of the model.

Modify the following code to save the residuals that we get using the resid() function as a variable in the Fingers data frame. Call the new variable EasyResid.

Below we have plotted a few of the residuals from the Fingers data set on the Thumb by Height scatterplot. Visually, the residuals can be thought of as the vertical distance between the data (the students’ actual thumb lengths) and the model’s predicted thumb length (60.1). 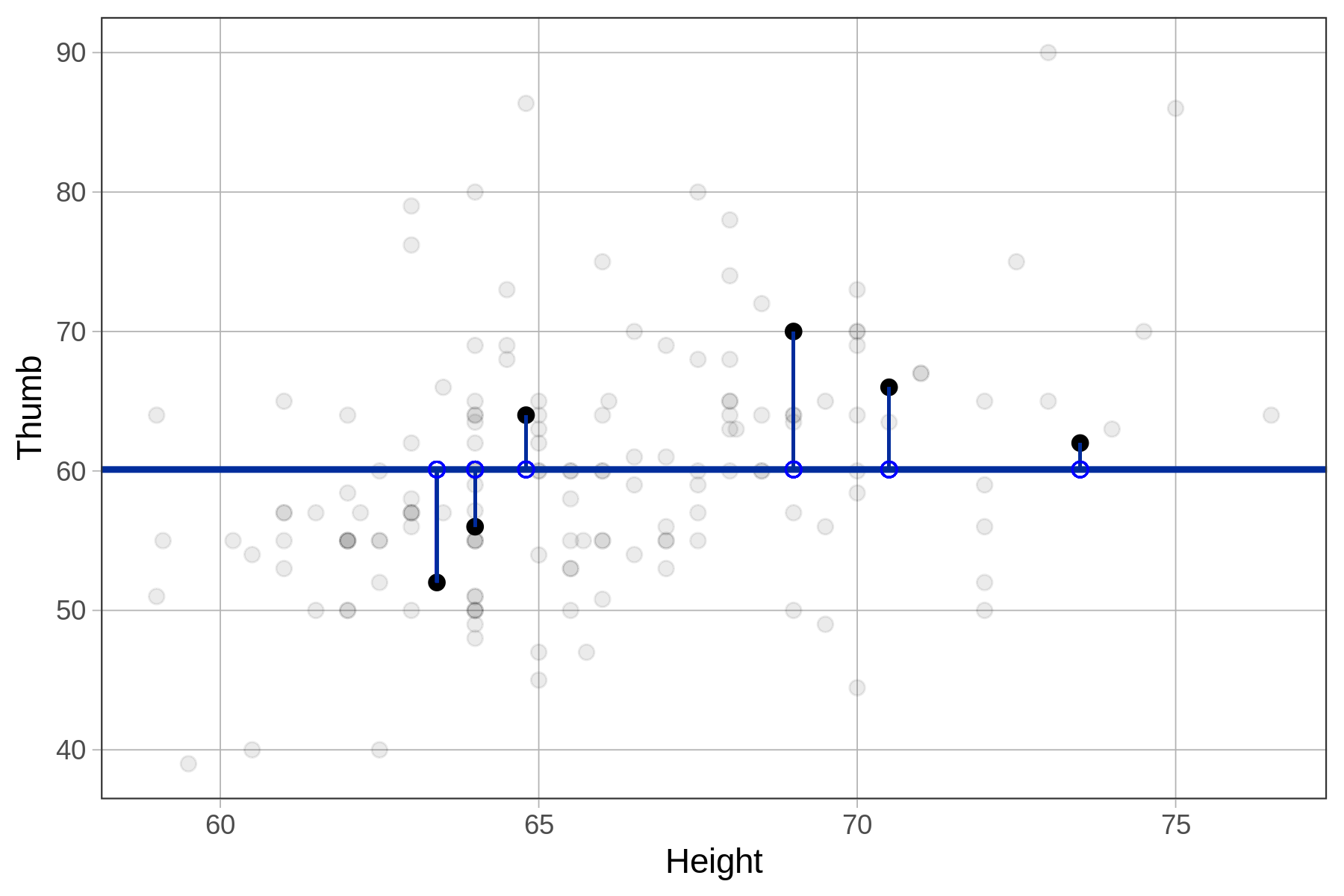 Below we’ve plotted histograms of the three variables: Thumb, Predict, and Resid.

Let’s see what we would get if we summed all values for the variable Fingers$Resid. Try it in the code block below.

R will sometimes give you outputs in scientific notation. The 1.7e-13 is equivalent to \(1.7*10^{-13}\) which indicates that this is a number very close to zero (the -13 meaning that that decimal point is shifted to the left 13 places)! Whenever you see this scientific notation with a large negative exponent after the “e”, you can just read it as “zero,” or pretty close to zero.

The residuals (or error) around the mean always sum to 0. The mean of the errors will also always be 0, because 0 divided by n equals 0. (R will not always report the sum as exactly 0 because of computer hardware limitations but it will be close enough to 0.)

5.6 Generating Predictions from the Empty Model 5.8 The World of Mathematical Notation
Responses
close