Reviewing the Concepts of PRE and F

Both PRE and F provide a means of comparing two models: one that includes an explanatory variable (a more complex model) with one that does not (the empty model). Let’s use the tipping experiment, again, to remind us of what PRE and F are and what they mean. Researchers wanted to figure out the effect of smiley faces on tips: Did tables randomly assigned to get smiley faces on their checks give higher tips than tables that got no smiley faces?

These two models of the data can be represented in GLM notation like this:

Note that the two-group model, in this case, could be referred to as the “complex model,” the empty model as the “simple model.” Complex and simple are relative terms. When we compare two models, one is generally more complex than the other; but the simple model does not always have to be the empty model (though in this case it is).

The PRE, or Proportional Reduction in Error, is the proportion of total variation in the outcome variable that is explained by using the more complex model over the simple one. Another way of saying this is that PRE is the proportion of Sum of Squares Total that is reduced by the complex model over the empty model. (This is just a recap of what you learned in prior chapters.) 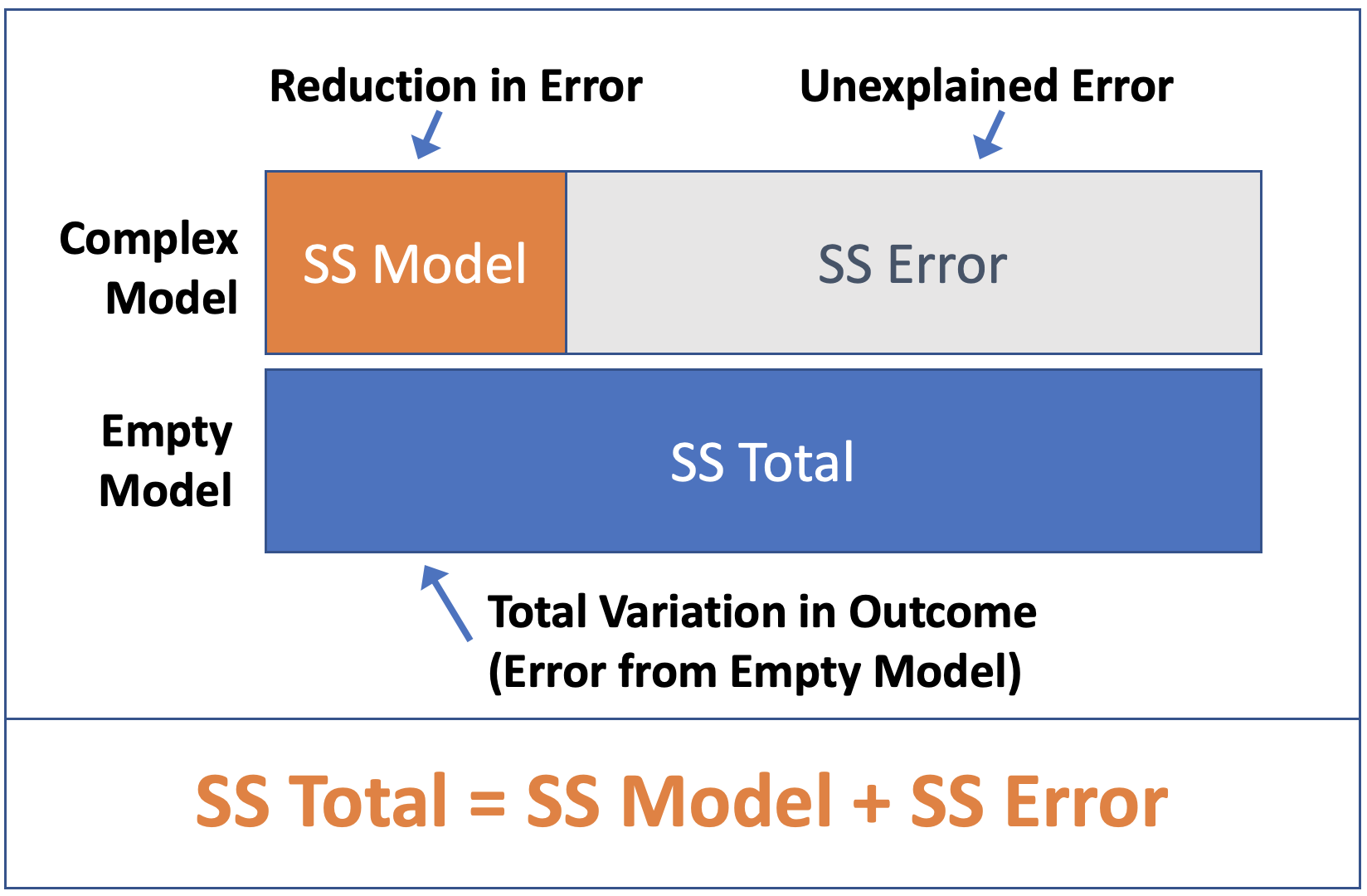 The F ratio is the ratio of two variances (or Mean Squares): MS Model divided by MS Error. F is closely related to PRE but it takes into account the number of degrees of freedom used to fit the complex model. Both PRE and F are ways of quantifying the strength of the relationship between the explanatory and outcome variables. You can think of F as a measure of the strength of a relationship (like PRE) per parameter included in the model.

We can get both the PRE and F from the ANOVA table that is generated by the supernova() function. Use the code window below to fit the Condition_model to the tipping experiment data, and then generate the ANOVA table.

We can see from the ANOVA table that adding Condition to the model results in a PRE of .07. This means that .07 of the error from the empty model is reduced, or explained, by the complex model.

That the PRE is greater than 0 is no surprise, however. The only way PRE would be equal to 0 is if there were no mean difference at all between the two groups in the sample (that is, if \(b_1 = 0\)). In that case, knowing which group a table was in (Smiley Face or Control) would add no predictive value, and thus result in 0 reduction in error.

But even if there were no effect of smiley face in the DGP, we would rarely get a sample with no mean difference at all between the groups. Because of random sampling variation, even when two groups are generated by the same DGP from the same population, it would be rare to get two identical means (e.g., a mean difference of 0).