We are also going to assume that the center of the confidence interval is at the observed sample \(b_1\) (e.g., $6.05 in the tipping study). We can convince you of this, we hope, using the picture below. We have re-colored the sampling distribution centered at $6.05 in red. We also drew in two dotted black lines indicating the cutoffs that separate the likely and unlikely area of that sampling distribution. Behind it are the distributions we used to find the upper and lower bounds. 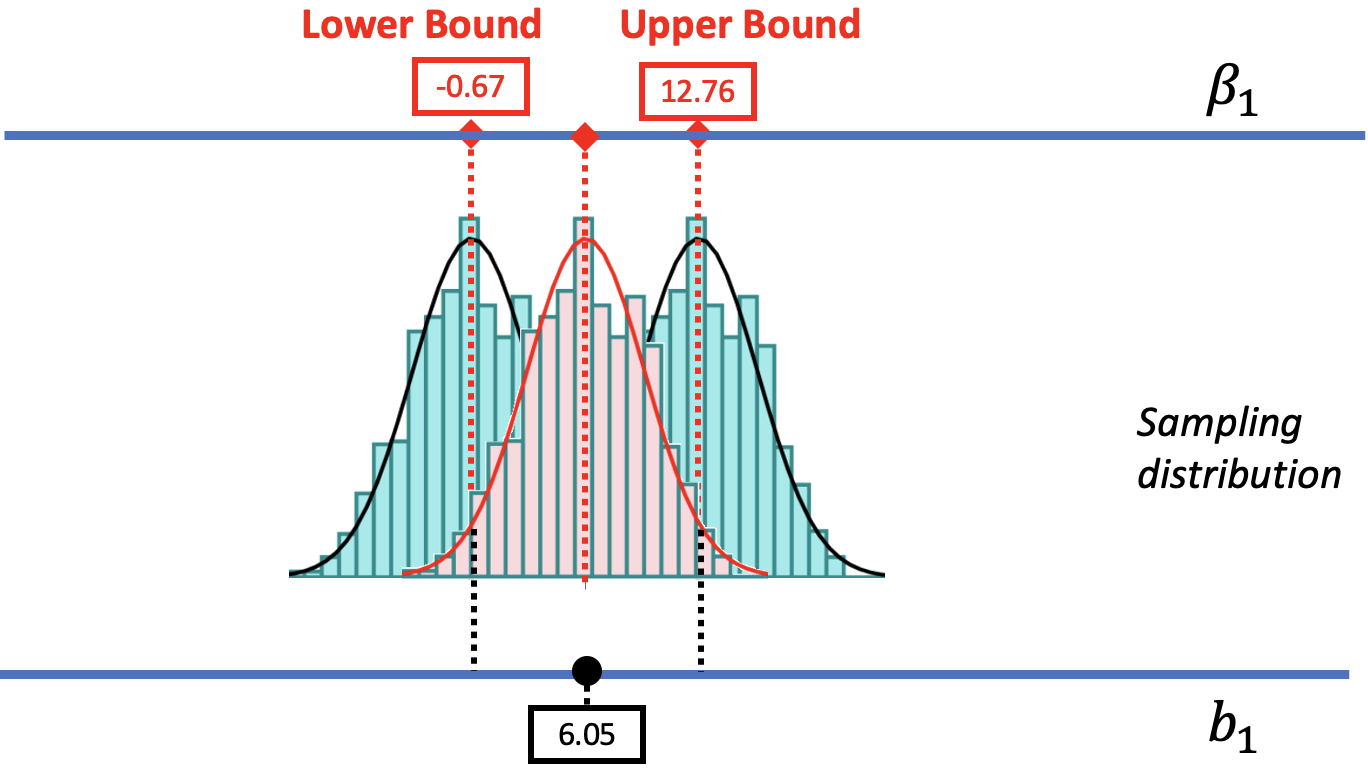 The .025 cutoff in the lower tail of the sampling distribution centered at the sample \(b_1\) lines up perfectly with the lower bound of the confidence interval. Likewise, the .025 cutoff in the upper tail lines up with the upper bound of the confidence interval. If only we had a sampling distribution centered at \(b_1\), we would be able to figure out the lower and upper bounds.

We previously used the resample() function with a vector (just a list of numbers) to simulate dice rolls. In bootstrapping, we will resample cases from a data frame instead of numbers from a vector.

To illustrate how this works, let’s focus on a subgroup of 6 tables from the TipExperiment data frame. We have put these six tables in a new data frame called SixTables. The output below shows the contents of this data frame.

Notice that in our small sample of 6 tables, there are 3 tables in the Smiley Face condition and 3 in the Control condition.

Now let’s see what happens when we resample() from this sample of 6 tables.

In the table below, we’ve put the original 6 tables on the left, and the results of the resample() function on the right.

The resample() function takes a new random sample of six tables from the data set. It samples with replacement, meaning that when R randomly samples a table, it then puts the table back so it could potentially be sampled again. This explains why a table in the original data might appear more than once, or perhaps not at all, in the resampled data.

Let’s now use resample() to bootstrap a new sample of 44 tables from the tables in the tipping study. Later, we will repeat this process many times to bootstrap a sampling distribution of \(b_1\)s. Let’s start by thinking about what would happen if you ran the following line of code on the complete TipExperiment data frame:

We can also see that the average Tip for each condition will be different in the resampled data frame. This makes sense because the exact tables included are not the same in the two data frames.

Use the code window below to produce the \(b_1\) estimate for the Condition model of Tip in both the original and resampled data frames. Run the code a few times, and see what you notice.

Now that we have reviewed how the resample() function works, let’s use it to create a sampling distribution of 1000 \(b_1\)s. 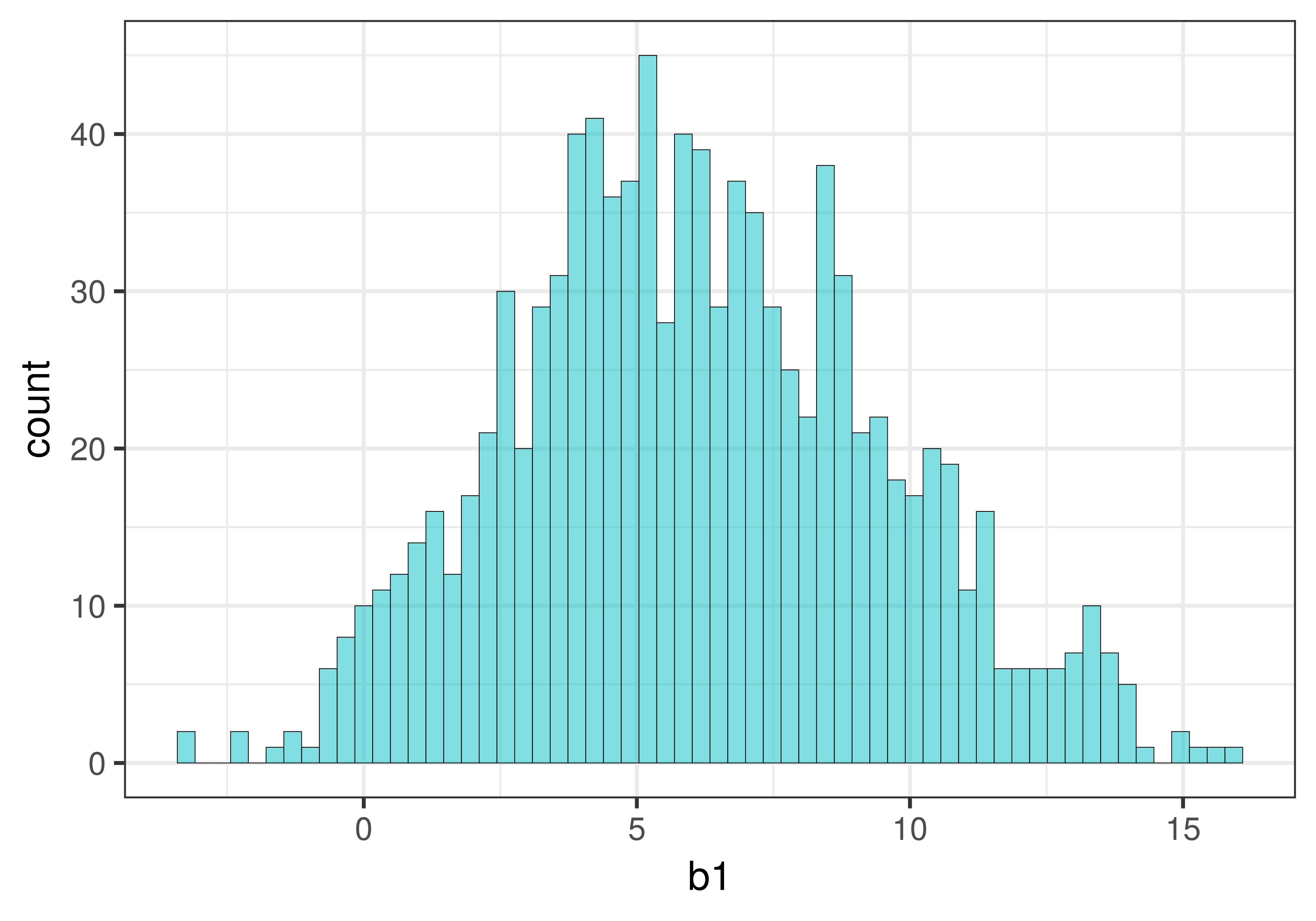 Use favstats() in the code window below to see what the average of the \(b_1\)s is in sdob1_boot.

The mean is fairly close to $6.05, the estimate of \(\beta_1\) from the tipping study. Because the resampled sampling distribution is roughly centered at the sample \(b_1\), it provides us what we were looking for in order to calculate the 95% confidence interval for \(\beta_1\): a sampling distribution centered at the sample \(b_1\).

Using the Bootstrapped Sampling Distribution to Find the Confidence Interval

We can visualize this task by shading in the middle .95 differently from the tails (.025 in each tail) as shown in the histogram below. (The histogram will show all the values of resampled \(b_1\) in order from smallest to largest on the x-axis.) 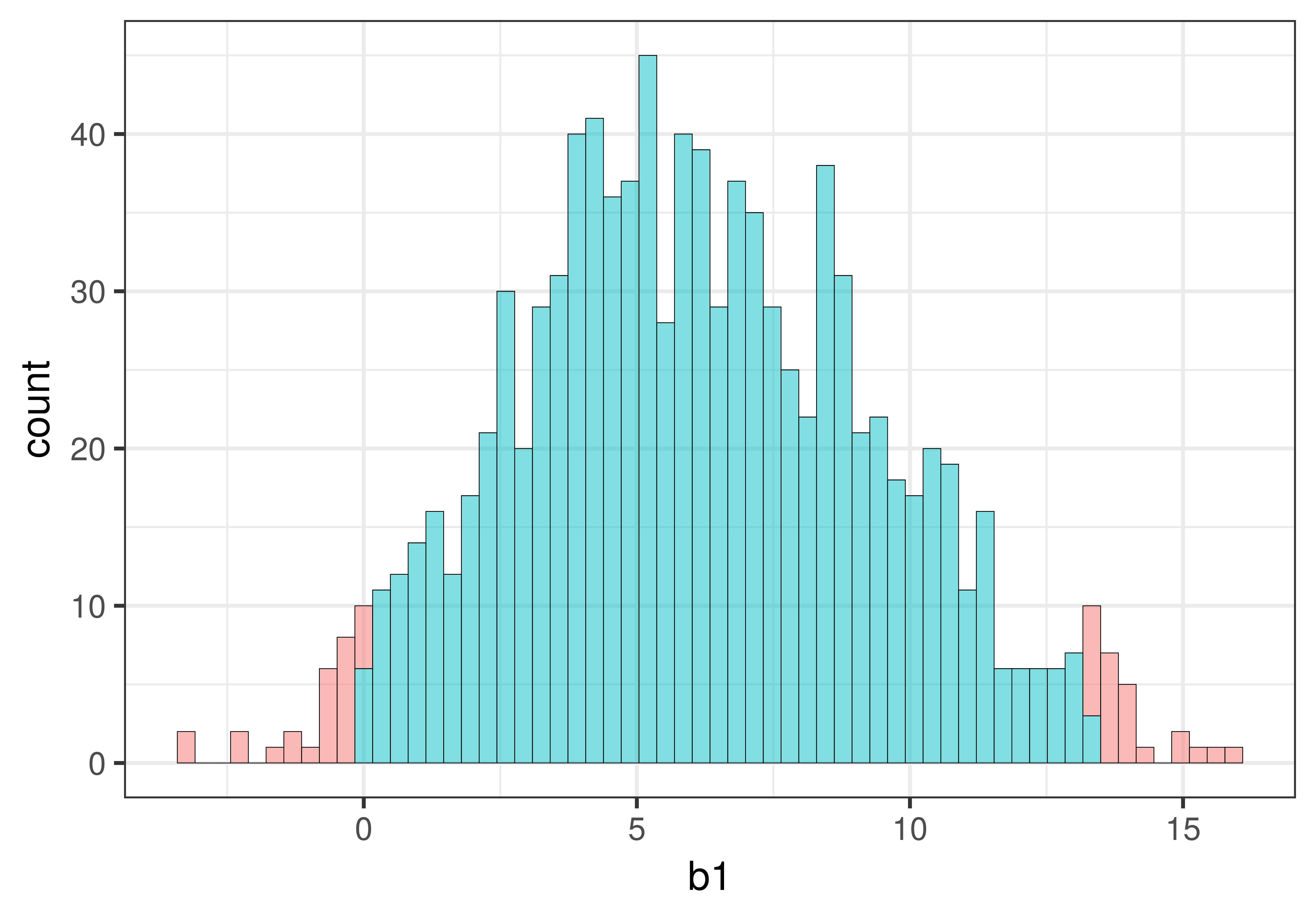 Here’s some code that will arrange the \(b_1\)s in order (from lowest to highest) and save the re-arranged data back into sdob 1_boot.

Based on our bootstrapped sampling distribution of \(b_1\), the 95% confidence interval runs from around 0 to 13 (give or take). Your numbers will be slightly different from ours, of course, because they are generated randomly. Based on this analysis, we can be 95% confident that the true value of \(\beta_1\) in the DGP lies in this range.