Where the F-distribution really shines, however, is in comparing more complex models (i.e., ones with more parameters being estimated) with the empty model. Let’s take, for example, a three-group model, which we could represent like this:

The F ratio, and its corresponding sampling distribution, provides an elegant solution to this problem. Instead of having to consider \(b_1\) or \(b_2\) separately, the F statistic compares the whole complex model to the empty model. But this will subtly change how we interpret the results of the F-test. Let’s see this in action by using the F-test with a three-group model.

A Study Comparing the Effectiveness of Three Math Games

The game_data data frame contains the results of a small study comparing the effectiveness of three different computer-based math games in a sample of 105 fifth-grade students. All three games focused on the same topic and had identical learning goals, and none of the students had any prior knowledge of the topic.

Students each were randomly assigned to play one of the three math games, which we will call A, B, and C. Each student played their assigned game for a total of 10 hours spread out over a single week. At the end of the week, their learning was assessed using a common 30-item test. The research question was: Were some games more effective than others? Did the three games produce different amounts of student learning?

Let’s compare the variable outcome across the three games, using both gf_boxplot() and favstats(). 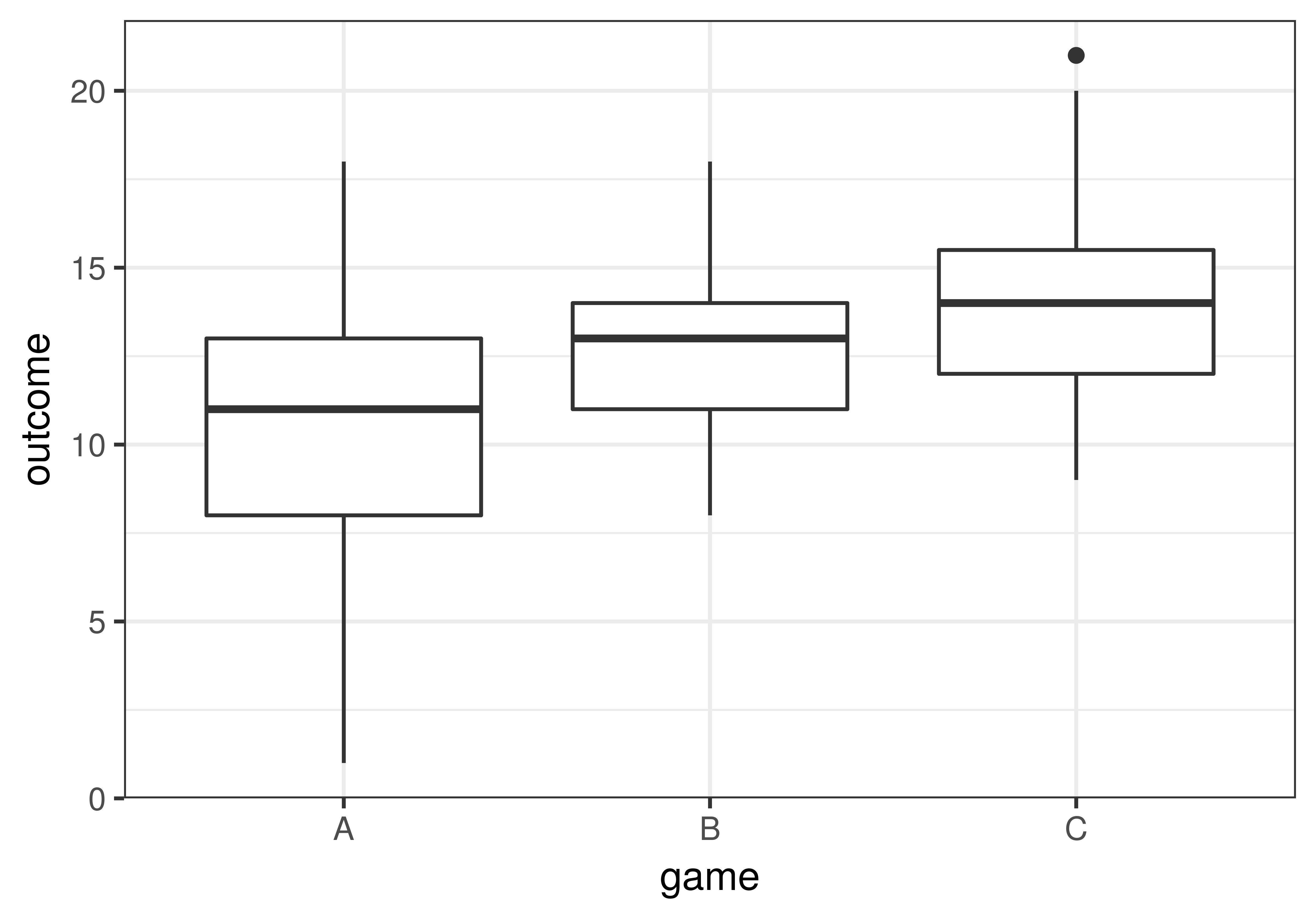 Although it appears from the boxplot that game C’s students learned more than game A’s, this does not necessarily mean that game C is more effective in the DGP. It is possible that the difference could simply be the result of random sampling variation: Maybe game C just happened to end up with a more capable group of students.

Fit the game model in the code window below.

In the next code window, run the supernova() function on the game_model to look at how it compares with the empty model.

Using the Sampling Distribution of F to Compare the Two Models

We can see from the ANOVA table that the game model so efficiently makes use of the additional parameter estimates that the variation explained by the complex model is over 12 times bigger than the variation unexplained. But does a high F provide enough justification to reject the empty model as a model of the DGP in favor of the game model?

Under the empty model, the true difference between the 3 groups is equal to 0. In other words, the three games are equally effective.

Interpretation of the Multi-Group F Test

A low p-value (e.g., one less than .05 or .01), which is always associated with a high F ratio, means that the probability of our data being generated by the empty model is very low, and so we would reject the empty model.

Ruling out the empty model does not mean that our alternative model (the model that best fits our data) is true. Our complex model is just one of the possible models that are consistent with our data.

With a three-group model, however, the interpretation of a low p-value is a little more complicated. It means that we can be confident that the empty model (where the three groups are equal to each other) is not a good model of the DGP that produced our sample and that the game model is significantly better. The low p-value tells us that the three games have a less than .05 chance of producing the same amount of learning in the DGP.

Rejecting the empty model does not tell us, however, which of the three games differ significantly from each other and which might not differ. The overall F test allows us only to compare the complex model as a whole to the empty model. If we want to know which games differed from which other games we will need a new technique: pairwise comparisons.