We represented this model in GLM notation like this:

where \(b_{0}\) represents the mean of the sample on the outcome variable.

The empty model is called a one parameter model because we only need to estimate one parameter (\(\beta_{0}\)) in order to generate a predicted score for each observation.

(Note: We use the term Grand Mean to refer to the mean of everyone in the sample in order to distinguish it clearly from other means, such as the mean for males or the mean for females.)

When we use the notation of the General Linear Model, we must define the meaning of each symbol in context. \(Y_{i}\), for example, could mean lots of different things, depending on what our outcome variable is. But we will always use it to represent the outcome variable. Because we are talking about the outcome of Thumb length here, we can also write the empty model like this:

NOTE: In this chapter and the next, we will generally use the non-Greek notation because our focus will be on estimating models from data. Later in the book we will return to the world of the DGP and ask how we can use the models we estimate to help us make inferences about the Data Generating Process.

We could represent the distribution of the six thumb lengths, broken down by Sex, using a faceted histogram (left panel, below). Or, we could use a scatterplot (gf_point(), as shown in the right panel), which might be clearer with such a small data set.

In the scatterplot below, the Grand Mean of the distribution, ignoring sex, is represented by the blue line. The Grand Mean is the model prediction for all observations under the empty model. Whether someone is male or female, their predicted thumb length (\(b_0\)) is 62 millimeters. Each person’s actual measured thumb length (\(Y_{i}\)) would be equal to 62 (\(b_0\)) plus their error or residual from the model prediction (\(e_i\)). 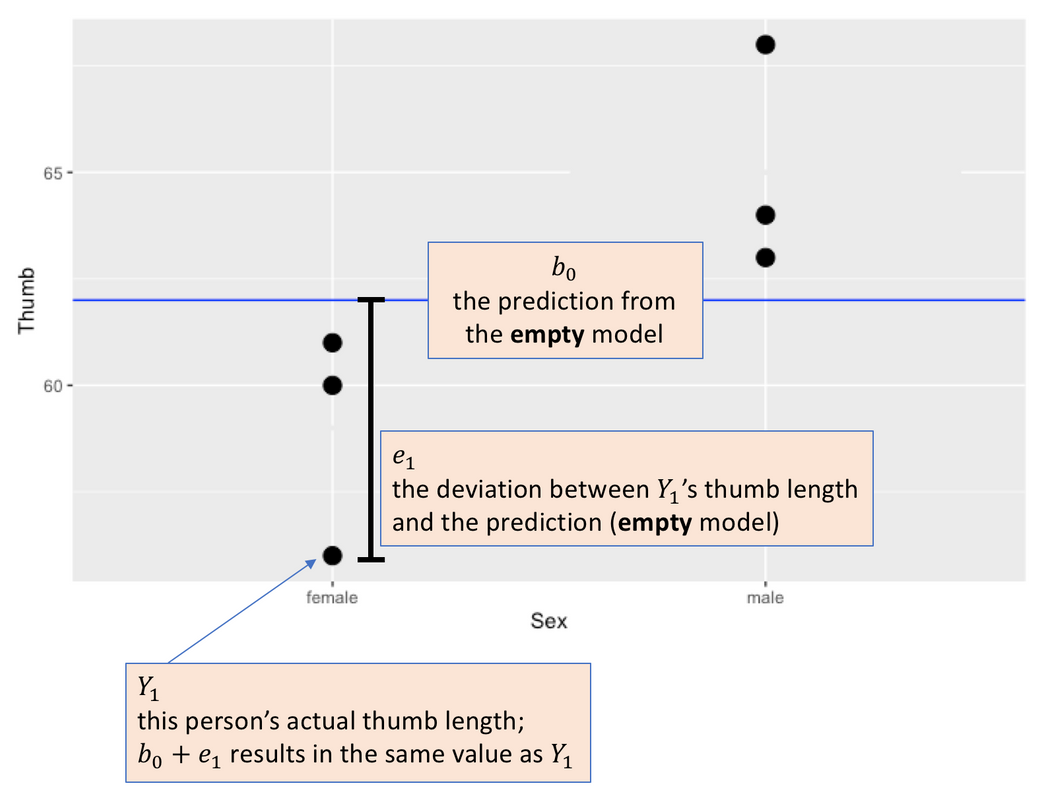 Adding an Explanatory Variable to the Model

Now let’s add an explanatory variable, Sex, into the model. In the Sex model, which includes sex as an explanatory variable, we model the variation in thumb length with two numbers: the mean for males (65), and the mean for females (59). The model still generates a predicted thumb length for each person, but now the model generates a different prediction for a male than it does for a female. 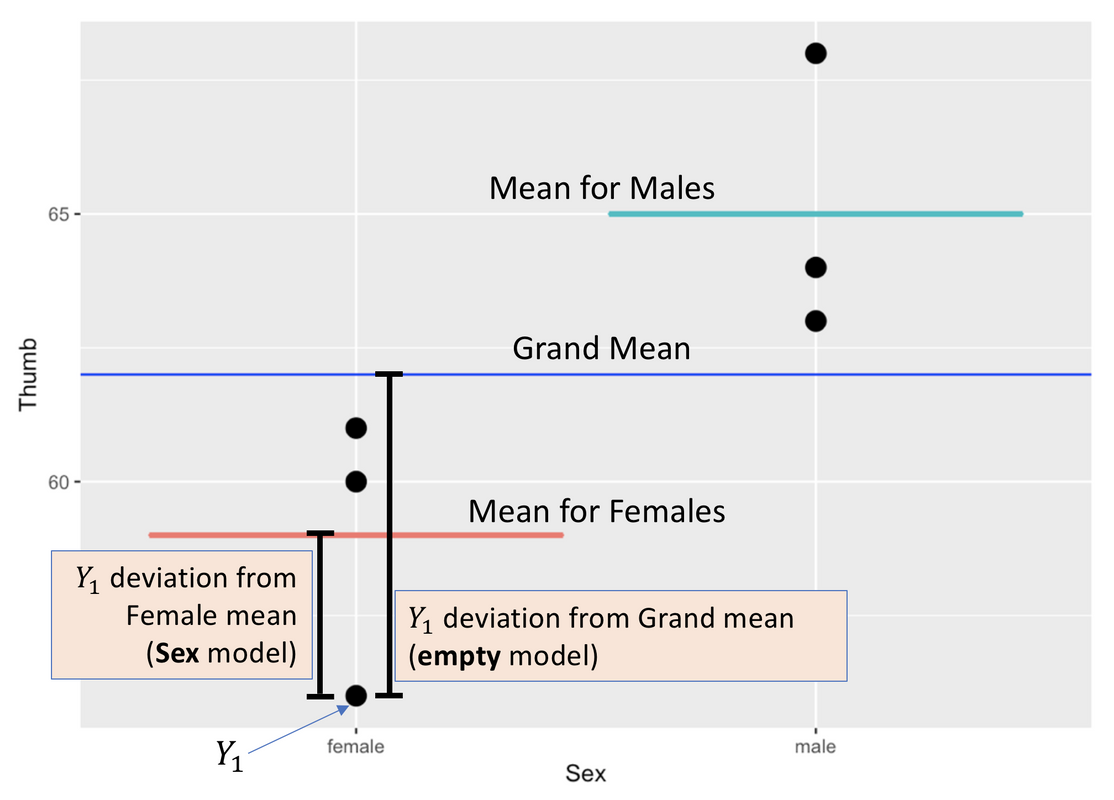 There are actually a few ways you could write this model; we will write the model of the DGP like this:

Replacing the parameters with their estimates, we write the model we are estimating with our data like this:

Interpreting the GLM Notation for a Two-Group Model

Let’s unpack the GLM notation to see how it generates the two possible model predictions. In the two-group model, \(b_{0}\) no longer represents the Grand Mean (62), but instead represents the mean for one of the groups. For example, \(b_{0}\) might represent the mean thumb length for females, which, in the TinyFingers data frame, is 59.

Here is how we would rewrite the model to include the estimated parameters:

You can also write Thumb and Sex instead of writing Y and X:

\(X_{i}\) is going to represent our explanatory variable, which is Sex. The subscript i reminds us that each person will have their own value on this variable (i.e., each person is either female or male). In order to make the model add up, we code \(X_{i}\) as 0 for females and 1 for males. (This method of coding the explanatory variable is called “dummy coding”. There are other methods, but this is the one we use in this book.)

Comparing the Two-Group Model With the Empty Model

We’ve discussed what happens when \(X_{i}\) equals 0 or 1, but what if \(\beta_{1}=0\)? This is worth thinking about, because it’s exactly what differentiates the two-group model from the empty model. Let’s compare the two:

A Final Note on Error

No matter how complex our models become, error is always defined as the residual, for each data point, from its predicted score under the model.